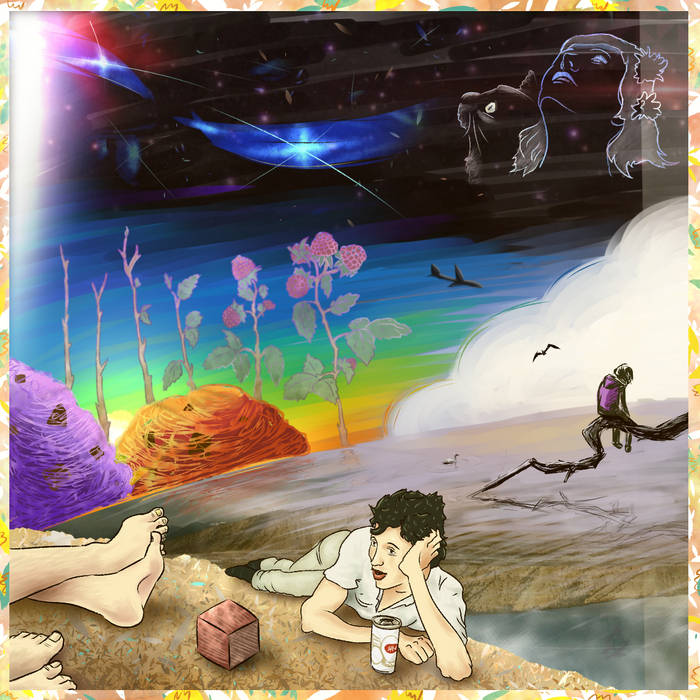 I am seriously struggling to write about what this compilation means to me. 16 people volunteered to cover each other’s songs for no money, no real “exposure”, nothing beyond wanting to be apart of such a project. 11 of those people were given the artist they’d cover from out of a hat. All of the songs you’re hearing (with the exception of “New Year”) are songs that have been previously released on the PRR discography for free download on a website that one of those artists (Ken Korb) built from scratch. Each of these people gave their time and energy to reinterpret a song that a friend (or a friend of a friend) created. Some of them offered even more time to help mix and master each other’s tracks. All of them at least seem to have really enjoyed it (and I hope they love the final product as much as I do). Of all the compilations and albums released on PRR, this one takes the cake on what PRR truly means to me: community.
A small tangent: why do some people create and others don’t? Why do some people take the risk of exposing and expressing themselves while others with that same desire stay silent? Certainly there are the few that seem to have been born without an embarrassed bone in their body. For those of you who are so blessed to be amazing at what you do from the get-go and don’t feel that shame and nervousness and insecurity – you’re lucky, so go take advantage of that! But for the rest of us (is it safe to say most of us???) who are doomed to start at anything poorly and then excel only with time and practice – we need each other. We need someone to think that we’re better than we actually are so that we can keep going, keep practicing, keep doing.

Our growth, then, is a result of our mutual support. Our growth is a result of our growing up, listening to each other’s terrible, cringe and laugh-worthy music. Maybe we weren’t always the greatest critics in retrospect, but maybe that blindness that friendship causes is partly to blame for our feeling like rock stars in each other’s eyes. And now, so many years later, we have 16 people volunteering, wanting, to not only put out music together, but to play each other’s songs that we love. Am I still blinded or is this compilation truly amazing? I may never know, but I don’t think I really care because these people make me feel like a great artist and I hope everyone gets to feel that way.

At the end of the day, I’d insist that to some degree, this collective is a mystery. Some part of it must be luck and some part of it must be us. I can’t speak for everyone who contributed but I can publicly thank them (even if only a few people ever really read this). Sometimes I find myself overwhelmed by the fact that I get to call these brilliant people my friends, collaborators, and, if I can be so bold, mutual admirers. It’s been an honor to assemble these tracks, thanks to everyone for participating and thanks for making a community with me.

And a special thanks to Ken Korb for the incredible album art (for real fans: try to find all the art from PRR releases re-collaged here) as well as Jackson Wargo for volunteering to beautifully master this compilation and promising not to hide fart sounds in the mix.

Cloud - Abunoriginal
Performed and engineered by Tyler Taormina. Mixed by Nolan Eley. "My ode to Cole." Covering the original song "Aboriginal" off of the album "Dark Room" by Redstone Repeater. Lyrics by Cloud.

Roberto - Blind, Blind, Blind
Performed, mixed, and engineered by Brendan. "With respect to the production styles of Bad At Baseball." Covering the original song "Blind" off of the album "Go Ahead" by Michael Brandon.

Michael Brandon - Snowflake
Performed, mixed, and engineered by Michael Brandon. Covering the original song "Snowflake" off of the album "Watkins Glen" by Sonoak.

Raw Paws - I Loe Ou
Performed, mixed, and engineered by Cole Verderber. "I would just want to say, thank you to Kenny Korb for being an amazing musician and songwriter and for inspiring me through the years!" Covering the original song "I Loe Ou" off of the album "This is Paradise" by Trestin Eeling.

PRR is a record collective of friends who's spread its tentacles across coasts and continents.

Bandcamp Daily  your guide to the world of Bandcamp